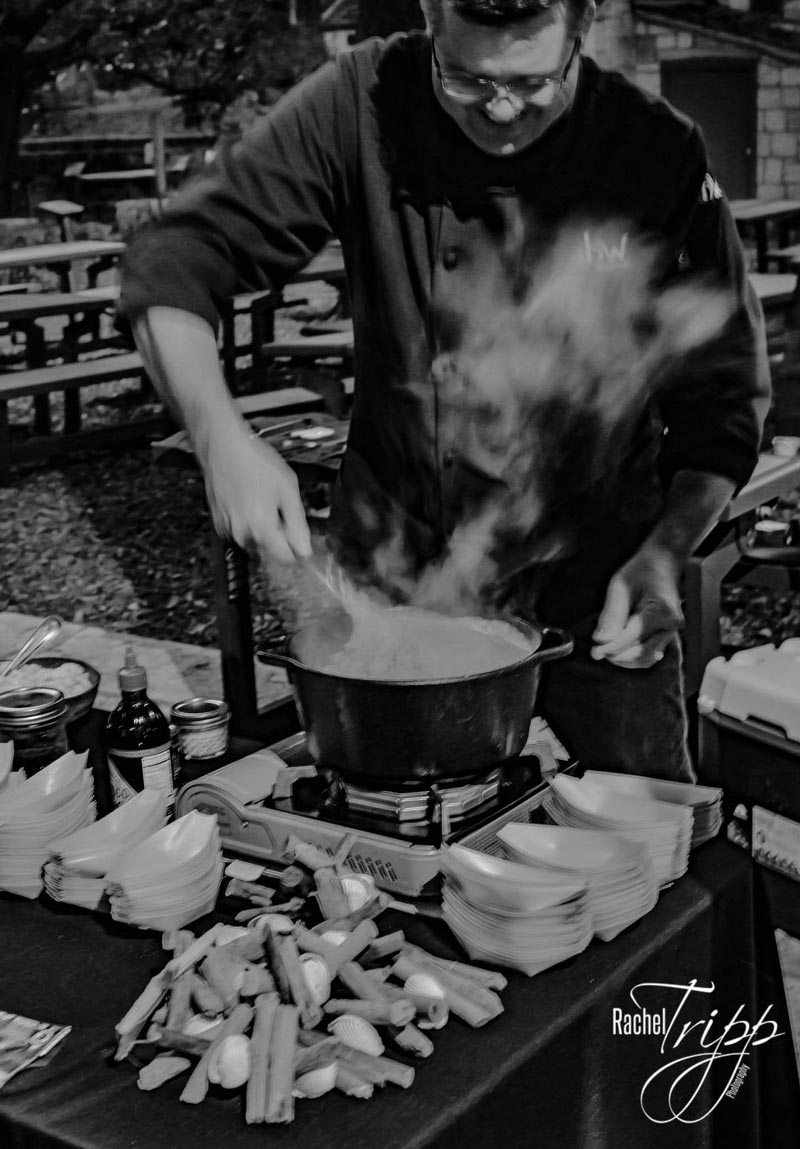 GET TO KNOW CHEF BRIAN WEST

"The Voice of Texas Cuisine"

A native Texan, Chef Brian West exploded onto San Antonio's culinary scene more than a decade ago with his Café Paladar. Since, he has seen San Antonio emerge as a food lover’s destination and has himself emerged as one of the most influential faces of Texas cuisine. Brian’s love of mentoring and inspiring new chefs called him to serve as a senior instructor at the Culinary Institute of America and lead the school to multiple victories in competitive BBQ and smoking challenges. In 2015, he was the Texas chef for the Great American Seafood Cookoff. He returned to the Great American Seafood Cookoff in 2016 and 2017 as a national judge. He has also served the Operational Chef of the Food Network’s hit show “Restaurant Impossible,” and still brags that he once beat the show’s host, Chef Robert Irvine in a cooking challenge during the Restaurant Impossible live show. In 2016, recognizing a need for Texas to market its own unique flavors and styles of cooking, he published the Texas Culinary Manifesto. This manifesto gave birth to the popular chef led Fiesta event, Taste of the Republic. Now, Chef Brian West owns and operates Chef Brian West inc. This restaurant and chef consulting company serves over a dozen restaurants in Central & South Texas. He also co-founded the Texas culinary alliance which helps smaller, locally owned restaurants around the state compete with larger operations. In addition to his collaboration with the San Antonio Fiesta commission, Brian is also the official chef of the San Antonio Stock Show and Rodeo. During the Rodeo, he hosts the Directors Club Restaurant featuring Texas dishes. Brian can also be seen on West Wednesday’s segments on San Antonio’s Fox News Daytime @ 9. Chef Brian West currently lives in his hometown of San Antonio Texas with his wife, son and dog.

As a child in San Antonio, Chef West became fond of grilling and hosting every party possible. Chef West's announcement that he wanted to become a chef came as no surprise to his family and friends. Chef West enrolled in the Culinary Program at the Art Institute of Houston in the fall of 1997. After working in the kitchens of several restaurants and hotels in Houston, Chef West graduated the institute with honors and moved back to his hometown of San Antonio. He began his culinary career in San Antonio as a Sous Chef position at the La Cantera Resort. He then worked as the Banquet Chef at Biga under Bruce Auden, Executive Chef of Fresh Horizon Catering Co, and Executive Chef at Hotel Contessa, Las Ramblas. In the early 2000’s he opened his own restaurant, Café Paladar, which received rave reviews and placed him as one of San Antonio’s top chefs.

In 2011, Brian left the kitchen and went back into the classroom, this time as a Senior Instructor at the Culinary Institute of America. While teaching at CIA, Chef West found a lack of understanding of Texas Cuisine, its origins and flavors. It was at the CIA that he began to contemplate the history traditional flavors of Texas Cusine.

After 3 years at the CIA, wanting to elevate and expand the flavors and methods of true Texas bar-b-que, he co-founded Smoke: The Restaurant. Under Chef Brian West’s direction, Smoke became one of the best reviewed and most popular bar-b-que restaurants in the city.

In 2017, sensing that the time was ripe for his message of Texas food to reach a wider audience, Chef West parted with Smoke and struck out on his own. It was then that Chef West began writing the Texas Culinary Manifesto and co-creating the Taste of the Republic Fiesta Event. This Chef-led culinary experience takes participants on a tour of, what Brian terms the “Six Food Republics of Texas”. In the Taste of the Republic, chefs from restaurants in and around San Antonio choose one of six republics and create a dish that encompasses the flavors and traditions of that area. During this time, Chef West also began his consulting business, Chef Brian West inc. Through this consulting agency, he has helped over 30 restaurants in South and Central Texas with menu creation, branding and hiring.

He is also the official chef of the San Antonio Stock Show and Rodeo, the host of San Antonio’s international sister city Chef exchange and the creator of multiple “pop-up” restaurants in and around San Antonio and private farm-to-table events at ranches around the state. His popular West Wednesday segments appear regularly on San Antonio’s Fox 29’s Daytime @ 9 show. Chef Brain West currently lives on the Northside of San Antonio with his wife, son and dog..

Chef Brian West is a food and menu consultant to several restaurant groups and is focused on giving voice to Texas Cuisine as expressed in His “Manifesto of Texas Cuisine” leading up major events such as the “Taste of The Republic”-Food Festival.

Stay tuned with the latest news, event, recipes, and more.